It’s fun to play with kids’ minds. Every winter, I read first graders the gorgeous Jan Brett book, The Mitten, based on the Ukrainian folktale . “What color is snow?” I ask, and they all shout “White!” Of course snow is white. That’s why Baba tells Nicki not to drop the white mitten she made him; in the white snow it will be lost forever (at least until Spring…) Nicki drops the mitten within seconds. Probably had to text something on his phone.

After that, I have the first graders design colorful mittens that will stand out in the snow. And all is well. Until second grade, that is.

In second grade, we again we read a Jan Brett book: The Three Snow Bears. In this story, Aloo-ki enters the three bears’ igloo while the bears are out for a walk. She tastes their soup, tries on their boots, and slips into their beds – until she finds one that’s just right. 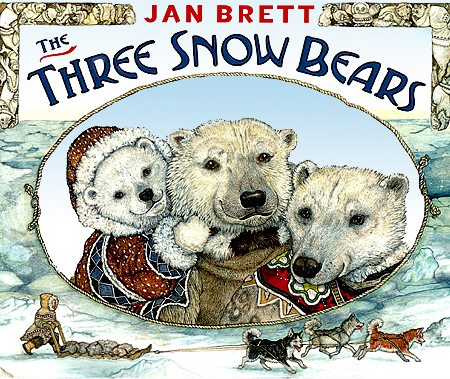 After closing the book, I again ask the students, older and smarter all, “So now what color is snow?” They shriek the predictable answer. And that’s when I reveal the true, but shocking truth: snow isn’t white, it’s blue! And purple! And gray! Okay, it’s sometimes white, but if you really look at the Snow Bears’ landscape, most areas are rendered in cool colored shadows. For the non-believers, I then take them to the window and point out the many shades of snow on the playground. They begin to sense the second, shocking truth: Art class is as much about learning to look as learning to draw.

Of course, some kid then squeals, “That snow is yellow!” “The slanting rays of the golden sun,” I point out. “The sun is behind a cloud, Mr. Roth,” the kid continues with folded arms. Guess they like to play with teachers, too.