My bio in my new website mentions this fact: I never smoosh spiders. It may seem like a small and strange thing to mention, though it’s not only part of my dedication to try to do no harm, but it also seems to be an ongoing theme in my fiction.

One of my early middle grade novels, SECRETS OF THE FIRE SEASON, centers on a boy whose pet tarantula gets left behind as his house is evacuated due to approaching wild fires. For various reasons, he goes back to try to save it. Even if you’ll never get to read that one (nearly acquired once, but no cigar), in the first BEEP AND BOB book, Bob’s best friend Lani has a trio of big, pet spiders. And though Bob hates spiders almost as much as he hates space, near the end Bob is put in the position of either letting one of the spiders float helplessly into a black hole, or risking his life by trying to save it. 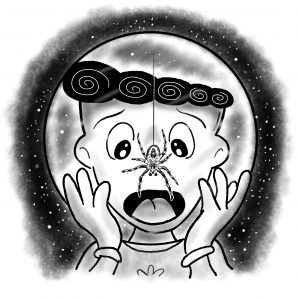 I won’t tell you how it ends. If a dog in a kid’s book is at risk, you’d know that its chances of survival wouldn’t be high. But a spider? They never die in kidlit, right? Um….