Posted August 26, 2017 by jonmroth & filed under Getting To Know: Kidlit Authors, News.

We all have our profound fears: snakes, spiders, planes, and of course…cuddle bunnies.

Not frightened yet? Then you obviously haven’t read the new middle-grade novel, Night of the Living Cuddle Bunnies (Sky Pony Press, August 29, 2017) by Jonathan Rosen. Like many Jonathans who write for kids, Jonathan is super serious and cool and not at all silly or nerdy, and I was happy to catch up with him for a chat.

Jonathan Rosen: Ha! Since it’s your house, I’ll acquiesce to your proposal. And, yes, you’re right, I just learned the word acquiesce, and vowed to use it in a sentence. 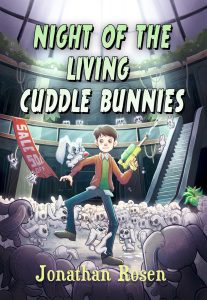 JRo 1: Can you succinctly sum up Night of the Living Cuddle Bunnies? Bonus points if you can do it without using any words from the title.

JRo 2: You’re sure not making things easy for this interview. Do you want me to answer without using vowels, also?

Okay, I’ll go for back cover copy then. Devin Dexter, a 12-year old, residing in the town of Gravesend, suspects his neighbor is a warlock, but nobody believes him. When that year’s hot Christmas toy starts coming to life and performing evil acts, Devin, and his cousin, Tommy, become convinced, and set out to to put an end to it, before the whole town is overrun by a mob of marauding stuffed animals.

JRo 1: What sparked the creation of your book?

JRo 2: For a long time, I had been wanting to do a horror/comedy hybrid. There were many movies that I loved, like that, when I was growing up. Things such as Fright Night, Gremlins, etc. Funny and scary, is a good mix.

So, while I’m thinking about this, a previous manuscript of mine, went to committee at two different publishing houses. Both places ultimately passed, but both said that they loved the humor, which was a comment I got a lot through the years. That spurred me to go on and work on a really humorous middle grade, which became Night of the Living Cuddle Bunnies.

JRo 1: What, if any, story details changed most drastically from first draft to last?

JRo 2: Believe it or not, not a lot changed. Really, only a few things. The first, was changing the character of Tommy, from best friend, to cousin. It was thought, that would be more logical, why they have to put up with each other.

Another thing, was more scenes with Abby. The little sister proved to be a big hit, so I was asked to expand her scenes.

The last thing was, the “villain”. Originally, I was going to have him be taken away or be gone at the end, but he was such a fun character, that I decided to leave him in the mix for sequels.

JRo 1: What is the most surprising thing about the publishing process?

JRo 2: The most surprising thing to me, is just how long it takes. From the time I signed the contract, to the time that Night of the Living Cuddle Bunnies was going to be published, was well over a year. Everything moves at a snail’s pace.

JRo 1: The obvious and not-so-obvious influences on Cuddle Bunnies are…?

JRo 2: I already mentioned some, but all the horror/humor movies I liked to watch. I love when the two genres mix. Among my favorites are, Gremlins, Shaun of the Dead, Zombieland and Fright Night.

Not at the point where I can just write full-time, but I have, at least, also expanded my writing career. Have also done work-for-hire, ghostwriting, and about to do some other things as well as my own work. Hopefully, all of that will increase this year.

JRo 1: What advice would you give to kids who like to write? And to adults who want to write for kids?

JRo 2: First thing, and this applies to both, is to read, and read a lot. You start to see story structure, by reading other books. And read in the genre you want to write. I read way more middle grade books than anything else. For kids, I think it’s important to do a lot of writing for fun. Just freestyle and a lot of creative writing. There isn’t enough time devoted to creative writing in school.

For adults, learn your craft. Read books, get critiques from pros and perhaps be in a critique group. Any way you choose, you need feedback. Conferences are also a great way to learn things from people in the industry.

JRo 1: You post often and entertainingly, but what’s one interesting tidbit about yourself or your book that you have never admitted online or publicly yet to anyone?

JRo 2: And exactly why would I admit it here? 😊

But, one interesting thing is, I’ve lived in many different places. Different countries and different states. I’ve also visited many more. When I was a kid, I didn’t like moving so much, but later in life, I’m glad I did, since it gave me an appreciation of different people and different cultures.

JRo 1: Thanks, JRo 2, for sharing about your book and process. I’m wishing Cuddle Bunnies much success!

Jonathan Rosen is a transplanted New Yorker, who now lives with his family in sunny, South Florida. He spends his “free” time being a volunteer coach and chauffeur for his three kids. Some of Jonathan’s fondest childhood memories are of discovering a really good book to dive into. He currently writes middle-grade, because he finds that he shares the same sense of humor as that audience. Jonathan is proud to be of Mexican-American descent, although neither country has been willing to accept responsibility. You can find him on Twitter, Facebook, FromtheMixedUpFiles.Com, The Tuesday Writers and his own website, WWW.HouseofRosen.com