Posted October 8, 2017 by jonmroth & filed under Getting To Know: Kidlit Authors, News.

This summer, I had the pleasure of visiting four dead American literary figures in Concord, Massachusetts, and one live one. Concord, as my wife and I discovered on a trip to the area, was the home of Thoreau, Alcott, Hawthorne and Emerson. Verily cool! Not as well known is that in the next town over lives an author named Rob Vlock, whose wild middle grade debut SVEN CARTER AND THE TRASHMOUTH EFFECT just released this past week. Rob  showed us Walden Pond (there’s a swimming beach and gift shop!) as well as Authors Ridge in Sleepy Hollow Cemetery, where the above four literary giants eternally rest together. We also chatted about the joys (and frustrations) of writing humor and action for kids. More recently, I asked him about his exciting debut: 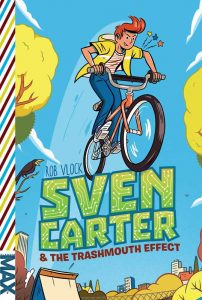 Can you sum up Sven Carter & the Trashmouth Effect for the uninitiated?

Sven Carter & The Trashmouth Effect is the story of a 12-year-old kid who’s perfectly normal in every way… except that he has an uncontrollable compulsion to eat really gross things. Oh, and he’s also a “Tick” — a super-advanced synthetic humanoid who’s programmed to wipe out the entire human population of Earth. When he discovers this little fact about himself, he, his best friend Will and his robot-hunting classmate Alicia set off on a quest to stop Sven from carrying out his mission. Along the way, they have to survive a whole host of Ticks — from terrifying clown-snakes to a 300-pound Chihuahua to killer roast chickens — that are determined to stop them.

What sparked the creation of your book?

I’ve always loved stories of self-discovery. So I knew I wanted to write a book about a kid who learns something truly unique about himself. Most stories of this sort feature a main character who uncovers a wonderful gift hidden inside him or herself. Like Harry Potter learning he’s a wizard. Or Percy Jackson finding out he’s a demigod. But I wanted to change things up a little. So I wrote a book about a kid who has to come to terms with the fact that his very reason for existing is to do something horrible. He a good kid who’s destined to do something very bad. Not only does he have to battle some bad guys along the way, he has to battle with himself to figure out who he really is and what his place is in the world. As soon as I came up with that central conflict, most of the story just snapped into place.

I’m definitely what you’d call a “pantser” – someone who writes by the seat of his pants. I find that if I plot my stories out too carefully, the whole exercise becomes too mechanical, too inorganic. Instead, I constantly try to create problems for my characters and myself as I go. I’ll intentionally write my characters into a corner that I genuinely have no idea how to solve. Then I have to puzzle it out on the spot. Usually I can figure out a way out of that corner – and sometimes I have to scrap the whole scene and rewrite. But there’s something that’s so rewarding about finding a way to save your characters from a room full of deadly robots with nothing but an apple to defend themselves with.

Before I became a published author, I don’t think I ever realized how many wonderful, talented people are working hard behind the scenes of every book. The author may be the person whose name is on the cover, but there are editors, art directors, illustrators, copy editors, proofreaders, typographers and a bunch of other people who all have to work together to bring your book to life. I benefitted so much from the passion and creativity all these folks poured into making Sven Carter the best book it could be. I was surprised and truly flattered to have that team standing behind me every step of the way.

The obvious and not-so-obvious influences on Sven Carter are…?

The science fiction influences are pretty obvious: Philip K. Dick’s stories — particularly Do Androids Dream of Electric Sheep (which was made into the movie Blade Runner); The Terminator movies; I, Robot by Isaac Asimov. I also found Rick Riordan’s Percy Jackson books to be inspirational. On the less obvious side, Franz Kafka’s Metamorphosis was a big one; P.G. Wodehouse’s humor was profoundly influential to me; and I’d have to throw some of Terry Pratchett’s Discworld books (especially the Death series) into the mix, as well.

I’m really good at finding ways to procrastinate, so there’s no shortage of non-writing activities I indulge in. I enjoy playing the trumpet (although my wife and kids probably don’t enjoy it so much). I love spending time in my workshop building things — pieces of furniture, musical instruments… I once made an electromagnet that could lift about two-hundred pounds. I was a little scared of it, to be honest, so I ended up taking it apart before I hurt myself. And, of course, I read. A lot.

What advice would you give to kids who like to write? And to adults who want to write for kids?

Don’t do it!!!! (Just kidding!) For me the most important thing is to have fun writing. This is especially important for kids. Writing shouldn’t be a chore. It’s an opportunity to be creative and get that great story in your head out so you can share it with the world. If you’re not enjoying it, the reader probably won’t enjoy it either, so don’t be too hard on yourself — that’s a great way to suck all the fun right out of it. Finally, be ready to revise and revise and then revise your revisions and revise the revisions of your revisions. It’s a ton of work, but it can be one of the most fun, satisfying things you can do!

Can you give any insight into what we might expect for Sven Carter 2?

Sven Carter & The Android Army will be coming out in the fall of 2018. And it’s been a blast to write. Without giving too much away, I can say that at the beginning of the book, Sven, Alicia and Will realize that the Ticks’ plot to destroy humanity is much larger than they originally believed. There are more Ticks out there somewhere, each with unique, potentially world-ending abilities. So Sven and his friends hop in Junkman Sam’s rusty RV and set out to save the world — again — from an even bigger threat. They make some pretty… unusual friends along the way. Readers can expect even more humor, grossness and head-popping action than in the first Sven Carter book.

You showed me some pretty amazing literary sites (photo = us at Thoreau’s cabin at Walden Pond). What literary site in the world that you haven’t visited would you most like to see? 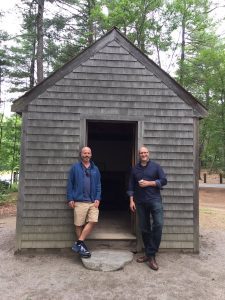 I’ve been lucky enough to have seen quite a few literary sites over the years — the café in Edinburgh where J.K. Rowling wrote Harry Potter; James Joyce’s house in Dublin; Herman Melville’s and Emily Dickenson’s houses in western Massachusetts and a bunch more. But I’ve always wanted to go to Willy Wonka’s Chocolate Factory (you don’t happen to have a spare golden ticket, do you?). But if not that, I’d settle for Ernest Hemingway’s house on Key West. I understand it’s filled with 54 six-toed cats, which may not be as good as a lifetime supply of chocolate, but is pretty darn close!

Thanks for giving me the chance to talk about myself, Jonathan! I really enjoyed it!

Rob can be found at http://www.robvlock.com and @robvlock on Twitter.