Posted November 9, 2017 by jonmroth & filed under Getting To Know: Kidlit Authors, News.

Of all hypothetical powers one may daydream about having, I have to admit I’ve always had a fondness for the ability to freeze time (especially in the middle of some of the hectic art classes I teach; instant quiet! Bathroom break! Time to kick back and read!) It’s a trope that comes up often in fiction, too, from the very-adult novel The Fermata, to one of the Halloween stories in the Simpsons. But up until Ginger Rue’s fun new chapter book series for 7-10 year olds, which begins 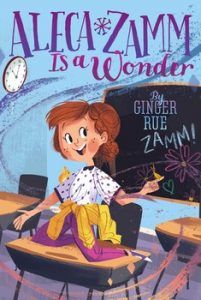 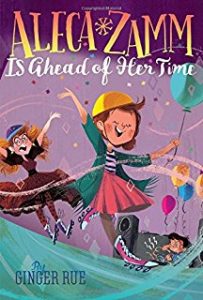 with ALECA ZAMM IS A WONDER, I’d never seen this power depicted so well in kidlit before. I contacted Ginger to learn more about her series and her writing process.

Q: Can you sum up Aleca Zamm for the uninitiated?

Ginger: The ALECA ZAMM series is about a girl who feels like she’s not special in any way. Then, on her tenth birthday, she discovers she can stop time just by saying her name, and restart time the same way at her leisure.

Q: What sparked the creation of your series?

Ginger: I actually wrote a series of these stories when I was in sixth grade. It was kind of cool because my teacher (who was awesome) let me read them to the class, and my class loved them and kept asking for new installments. It was a reward at the end of the week: if everyone behaved well through Friday, the teacher let me read one of the girl-who-stops-time stories aloud. Did I save any of the stories I wrote when I was 11 or 12? Sadly, no, I did not. What I wouldn’t give to have those stories now!

Ginger: It was funny because I was having this really down time when I remembered the Aleca stories of my youth. I was in my 40s, had the flu or some really terrible sinus infection, and I’d pulled my back out on top of that, so I was on all this medication and feeling horrible, and I was lying in bed sort of re-evaluating my life choices, berating myself for thinking that I could make it as a writer. I tried to remember what in the world had ever made me think I was any good at writing, why I’d ever thought I could do this for a living. And that’s when I remembered the Aleca stories from sixth grade. I thought, “Man, the kids in my class absolutely loved those stories, and they were so fun to write!” I think one of the kids in my class had actually written fan fiction, even though that wasn’t a term we had back then. I thought, wow, maybe that’s the book I ought to write. So once I was up and about again, I emailed my agent and sheepishly said, “I know we still haven’t sold my last project, but I have this idea for a children’s chapter book series….” I was afraid she would think I’d lost my mind, but she said, “Go for it!” I sat down to write ALECA and was amazed at how much fun it was and how easily it came together. Maybe this was because I’d been doing 40,000-50,000-word manuscripts up until this point (ALECA is about 12,000), or maybe it was because I was just having fun with it, making myself laugh, never really expecting anyone else to see it, but I remember it came together sort of magically.

Q: The obvious and not-so-obvious influences on Aleca Zamm are…?

Ginger: Well, I think there is no way to get around how much Barbara Park’s JUNIE B. JONES influenced me as far as reminding me how much fun elementary chapter books can be. I read all of those to my daughters when they were young, and we laughed ourselves silly. I also really loved Beverly Cleary’s books when I was young. She always made me laugh. I think Junie B. and Ramona have the sort of sass and spunk that Aleca maybe inherited.

As far as influences on the characters, I had a great aunt named Aunt Zelpher. I didn’t meet her until I was in high school, but I’d heard my mom and grandmother talk about her for years. My mom’s family is from Mississippi, so when they pronounce things, it’s rarely like they’re spelled. They’d say, “Aint Zephyr this” and “Aint Zephyr that.” And I recall thinking that it was so magical and mysterious that this woman was named after the west wind. I was disappointed to find out that wasn’t actually her name! She was a tiny little spunky woman, and I liked her immediately, even though I think I was around her only once or twice. All the women on my mom’s side of the family are like that: sassy and no-nonsense and will say anything to anybody. So Aunt Zephyr in the book reminds me a lot of my mom and my aunt Betty, my mom’s sister. There’s a scene in the first ALECA book where Aunt Zephyr sees her nephew after many years have passed, and she tells him he hasn’t changed a bit, only to immediately follow that up with, “Of course, I’m lying. Your hair is gray and you’re developing jowls,” or something to that effect. It made me LOL when I wrote it, just picturing my aunt saying that. Also, when I hear Aunt Zephyr’s voice in my head when I’m writing, she sounds exactly like my 12th grade English teacher, Mrs. Roby, who was a tiny little woman who struck fear into the hearts of all her students. Aunt Zephyr is an amalgamation of all these strong women I’ve known. I guess I like the juxtaposition of a small, frail older woman with a big, strong presence. (Although my mom and my aunt Betty are not frail. They were both nurses and have the strength and energy of women half their age, combined with a take-no-prisoners attitude. The last time a coyote got into my cousin’s chicken house, Betty very nonchalantly just went out there and killed it!)

Q: What do you do when you’re not writing?

Ginger: I take my kids to the orthodontist! Seriously, between the three of them, I feel like I take somebody to some kind of appointment every day! But I am extremely grateful I get to do that. I also have a puppy who now runs much of my life. Other than that, I am a contributing editor for GUIDEPOSTS magazine, so I usually have one or two articles in the works for them at all times, if I’m lucky.

Q: What advice would you give to kids who like to write? And to adults who want to write for kids?

Ginger: Well, first of all, I’d tell those kids to SAVE THEIR STORIES…because you could wind up in your 40s reworking them! And it would be nice to remember specifically what plot points and characterizations appealed to you when you were that age. For adults who want to write for kids, I guess I’d remind them not to be preachy. Make the child character drive the plot. Get the adults out of the way as much as possible, unless they’re nutty and colorful and a kid at heart.

Q: What’s next for Aleca? Any non-Aleca projects on the horizon?

Ginger: After the fourth ALECA novel comes out, I’m not sure. I hope there will be more because I have a lot of places we could go with that, and I’m not sick of any of the characters yet, so that’s pretty cool. But we’ll see. Right now, I’m actually working on a nonfiction project for middle grade and on a young adult novel.

Q: And finally: if you could freeze time, what would you do with your power?

Ginger: I wish I could have a hallway with several doors, one for each year of my life, and that whenever I wanted to, I could open the door to that year, walk in, and be that age again for a little while. I have no doubt that the doors I would open most frequently would be the ones to the years when my children were little. Oh, to be able to rock them to sleep, or have them sit on my lap and color again, or to cuddle up and read a picture book together! It all goes by too fast, but if we could freeze it and keep it, we might never restart time—we might just stay there always. But it’s also pretty great to live in the now, when they are old enough to offer hilarious sarcastic commentaries! Each phase of life has its own charms, but yes, freezing time to savor it all a little longer would be wonderful.

Me: Thank you, Ginger. I’m wishing the Aleca Zamm series much success!

You can find Ginger at http://www.gingerruebooks.com  or on her Facebook page at https://www.facebook.com/GINGERRUEBOOKS/?ref=aymt_homepage_panel.