Posted February 25, 2018 by jonmroth & filed under Getting To Know: Kidlit Authors, News.

If I mentioned that I just discovered a cool new middle-grade series about a young orphan on the hunt for a magical stone, you might say, uh, Harry Potter came out 20 years ago. But what if that orphan lived in 1850s Missouri, and had to fight off a horde of zombie outlaws? If you know some kids ready for a different kind of fantasy, I heartily encourage them check out Legends of the Lost Causes (Henry Holt), which released this past week. I caught up with co-author Brad McLelland, who talked to me about his kidlit debut: 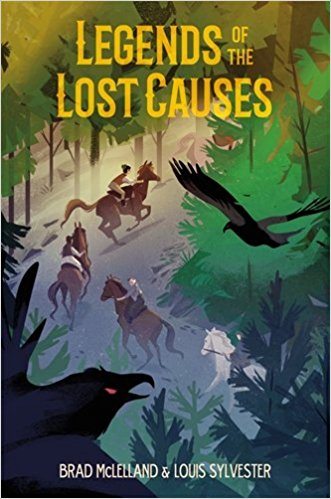 Me: Can you sum up Legends of the Lost Causes for the uninitiated?

Brad: Legends is the first book in a 4-book Western Fantasy series that tells the story of 13-year-old Keech Blackwood, a frontier-smart orphan in 1855 Missouri who encounters a deadly desperado named Bad Whiskey Nelson. A devastating act of violence turns Keech on a path toward vengeance, and along the road to meting out his retribution he runs into other orphans who’ve suffered similar tragedies. The kids form a posse and hunt the outlaw together, but along the way, they uncover Bad Whiskey’s devilish plot to retrieve an ancient relic known as the Char Stone. And Whiskey’s not alone in the hunt. He brings along a horde of undead outlaws, relentless in their dark business. Imagine The Goonies with the raw, gritty realism of Louis L’Amour and the dark thrills of The Walking Dead, and you have Legends of the Lost Causes!

What sparked the creation of your book?

Legends took its first tiny breath as a short story concept in my head several years ago. I envisioned a tale about a dark outlaw in pursuit of an ancient artifact. That was all I had. I never wrote the story, and it quickly faded into the background. The concept leaped back to life after I met Louis Sylvester in the Oklahoma State University creative writing program in Stillwater. We started swapping fiction ideas one day at a friend’s birthday party, and realized we shared a lot in common with our writing and interests. I told him the basic outlaw premise and he just started listing off the coolest concepts. In other words, I knew I had just found a writing partner.

The obvious and not-so-obvious influences on Legends are…?

Although Legends features undead villains and dark magic, I have to list Charles Portis’s True Grit at the very top of the “Most Obvious” column. Louis and I both love that brilliant novel and its scrappy, resourceful MC, a 14-year-old girl named Mattie Ross, who hunts her father’s killer with U.S. Marshal Rooster Cogburn and Texas Ranger LaBoeuf. Two other obvious influences would have to be Susan Cooper’s The Dark is Rising Sequence, and Stephen King’s Dark Tower series. I think some not-so-obvious influences would include Little House on the Prairie (yes, really!), maybe a sprinkle of Jonah Hex, and the fantastic junior detective series, The Three Investigators by Robert Arthur Jr.

Can you share about your creative process? About having a writing partner?

I like to call our creative process “controlled chaos.” Louis and I have worked out a fantastic system for writing together, but the system itself might make other writers cringe at the mere thought of it.

We start by discussing the story we want to tell and writing a loose outline. Then we take turns drafting each chapter. For example, I write a chapter, then send it to Louis, then he reads through it, makes some changes and adjustments for voice and style, then writes a new chapter and sends it back. My next step is to look at the edits on my first chapter and then make changes on the next, and so forth. In that manner, we’re always editing and always writing new material, a conveyor belt of word-churning that I call a “perpetual motion machine” of drafting and redrafting. When you work in a system like that, you have to be prepared to endure some heartache when you see your partner erase a sentence you love — but in the end, the process works so well for the shared, overall vision. We end up with a book in which every word and syllable feels like a diamond to us.

I would have to list two things that have surprised me the most. The first is that I’ve found a writing partner who feels like true family, a close friend who works so perfectly lock-step with my mind and creativity. The second has to be the pure awesomeness of our publishing team. Our agent, Brooks Sherman, and the entire Macmillan squad working on this project are just exceptional human beings, with nothing but a desire to help me and Louis fulfill our dream and get the best books possible on the shelves.

I’m actually finding it harder and harder these days to break away from Keech and the gang, but when I do find a little time, I love to play board games and put together jigsaw puzzles with my wife, Alisha, and stepdaughter, Chloe. We also enjoy going to movies on the weekends, geeking out together over the latest Marvel and Pixar films.

Any advice to kids who like to write? And to adults who want to write for kids?

My strongest advice is simply to stick with it—and by “it,” I mean the entire process, from reading all the books you can cram, to honing your craft, to querying agents and beyond. I know that sounds like an “easy-for-you-to-say” kind of thing, but in mine and Louis’s case, perseverance and patience are exactly the tools that paid off. We started work on Legends all the way back in 2010, and even though life changes threw heavy speedbumps onto our path, we stuck with the process and never gave up on the dream of publication. Three years after we typed the first word of Book 1, we acquired Brooks as our agent, and three years after that, he sold our series to Macmillan. So I would say put the straps on tight when you take the author’s seat, don’t look away from your goal, and don’t be afraid to fail from time to time.

As an illustrator who works on my own covers, I’m always interested in learning an author’s involvement in and reaction to their own cover?

Months before Macmillan even offered the first glimpse of our cover, we learned who the publisher was courting to be our cover artist—the fabulous Alexandria Neonakis, an illustrator and graphic designer from Dartmouth, Nova Scotia, Canada. We looked at Alex’s portfolio and grew very excited about the visual beauty she would bring to our story. Then after we began working with our editor, we started sharing concepts back and forth. The Macmillan sales team suggested a “bird’s eye” view of the Lost Causes wrapping around both the front and back of the book—an idea that Louis and I found completely intriguing. The resulting design, however, was a complete surprise to us. And when Alex finally unveiled it, we were just floored.

What’s next for Keech and the gang?

Well, the particulars are a bit top-secret at the moment, but I can tell you that the kids will encounter a multitude of tight situations in Book 2. Rumors have it they’ll discover a deep mystery surrounding a place called Bonfire Crossing, and they might even come face-to-face with a monster unlike anything they faced in Missouri. 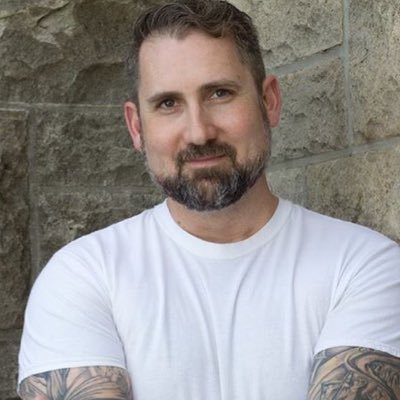 More to come very soon, when we  the title reveal!

Thanks, Brad, can’t wait! Wishing you and Louis much success!

Check out Brad at www.bradmcbooks.com and the official series site at www.thelostcausesbooks.com!