Posted February 27, 2021 by jonmroth & filed under Getting To Know: Kidlit Authors, News. 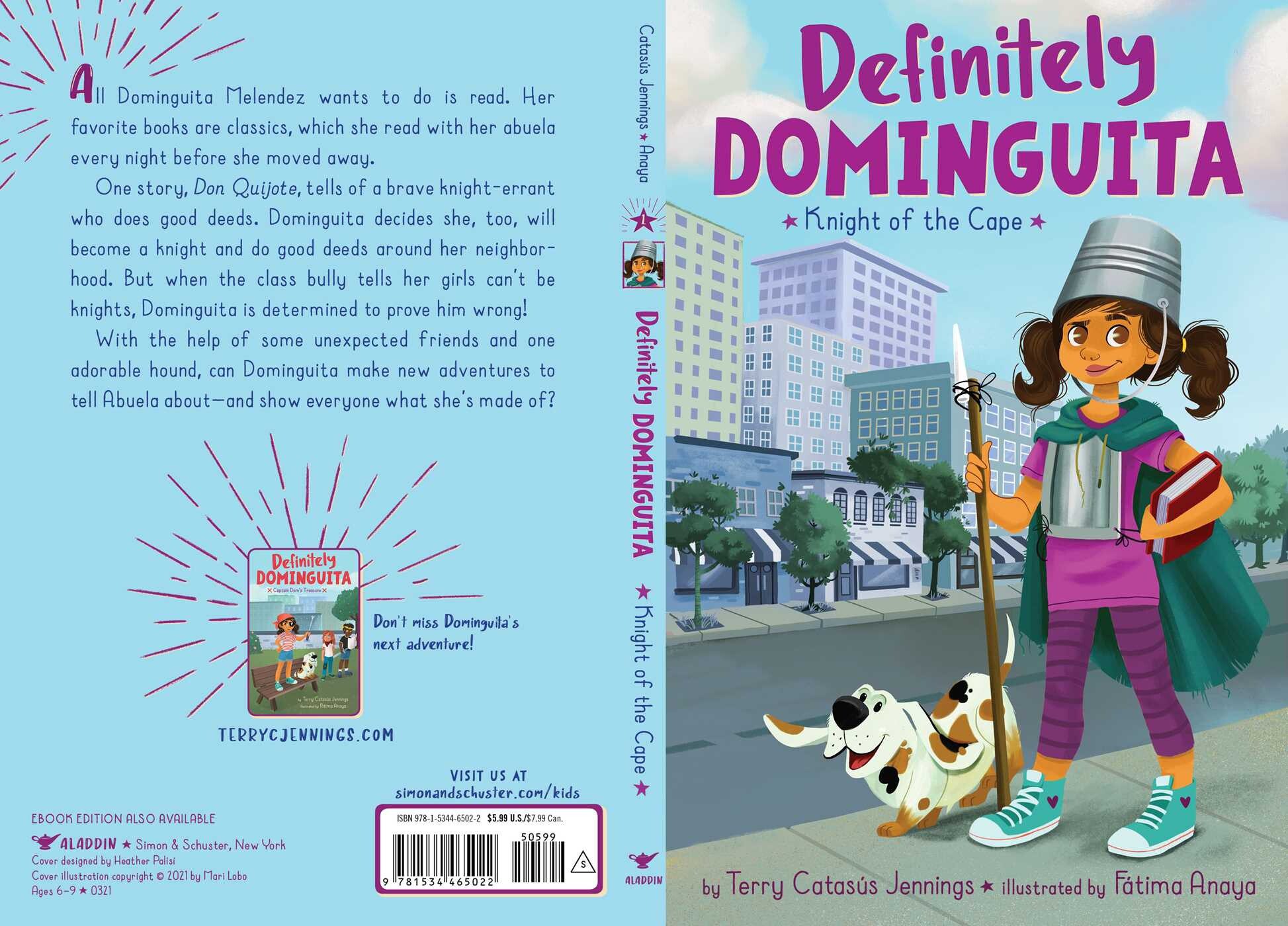 I’ve always had a soft spot for kids who love to read. Maybe because I was one of them! But do kids who love to read books make good characters in books? They certainly do if their name is Dominguita Melendez, plucky protagonist of the awesome new chapter books series, DEFINITELY DOMINGUITA (Aladdin, 2021). I caught up with author Terry Catasus Jennings to learn more:

Me: How did you get into writing children’s books?

Terry: Thank you so much for inviting me. I’m delighted to be here with you. I’ve always wanted to be a writer, since I was a kid. Especially after I read Little Women. And stories are always rolling around in my head. I’m always reporting on what’s going on. Often making things come out better than they did in real life. But for many reasons, most of them having to do with being an immigrant and needing a secure job, I didn’t pursue a career in writing. That’s someone who is really talented pursues. Hemingway, and Louisa Alcott. It’s like in my head they were hit by lighting and turned into authors. I never even thought of looking at it as a career. You know, back then, maybe we didn’t look at having a career as much as having a job. I knew I would go to college so I could get a job where I could support myself. And I ended up majoring in math and took a lot of science and I actually did land a job in the engineering department of the telephone company. Then when I had children, I decided to stay home with them while having my own tiny bookkeeping company for small businesses.

But stories never stopped rolling around my head. And when my youngest went to middle school and I really didn’t need to volunteer anymore, I decided to try my hand at writing and to see if I had what it took. So I started with essays, and some of them were published in The Washington Post. And I wrote a family humor column for my local newspaper. Then I tried to get some sort of a steady gig, and I ended up writing educational content for the Smithsonian. Science stuff. But my name was always buried in the next to the last page. So then I tried my hand at science books for kids—creative non-fiction—books that would have my name on the cover. And then some regular non-fiction. I did a lot of work for hire. And each time something was published I wanted a bigger step. Say, going from a small science publisher to a real publisher. And that happened with Dominguita and Simon and Schuster. But it took forever. I’d say about 20 years.

What was your inspiration and process for Definitely Dominguita?

Remember those stories that are rolling around in my head? I was weeding and thinking to myself that what I was doing was as impossible as Don Quijote trying to become a knight. But wait. The idea of a kid trying to become a knight might work. And this little boy showed up in my head dressed in a cape and a make-do helmet. Fortunately for all of us, my daughter reminded me that I am a feminist and it would be a lot better if my protagonist were a girl. Before I finished my weeding, my character had a name and I’d written the beginning of the book in my head.

The process for writing these books was different from writing a regular novel. First I had to read the actual classics. And re-read them. I took notes on the characters speech and mannerisms. I looked at scenes that were iconic to the book, like Don Quijote tilting at a windmill. Or scenes that could translate well into a Dominguita story, like the rescue of the queen’s diamonds in The Three Musketeers. Once I was sure what parts of the classic book I wanted to echo, then I began to write. The three protagonists don’t always take the place of a character in the classic. For instance, in Captain Dom’s Treasure, there is no Jim Hawkins, but there is a Captain, a doctor, a mate and definitely a Long John Silver. There is also the maroon they find when they get to the island. But the three characters have specific roles in the series. Dom is the big thinker. Pancho is the realist who reels her in. Steph is the peace-maker. I didn’t set out to make them that way, but by the time the third book rolled around I realized that they had settled into those roles and that those roles made the books work. 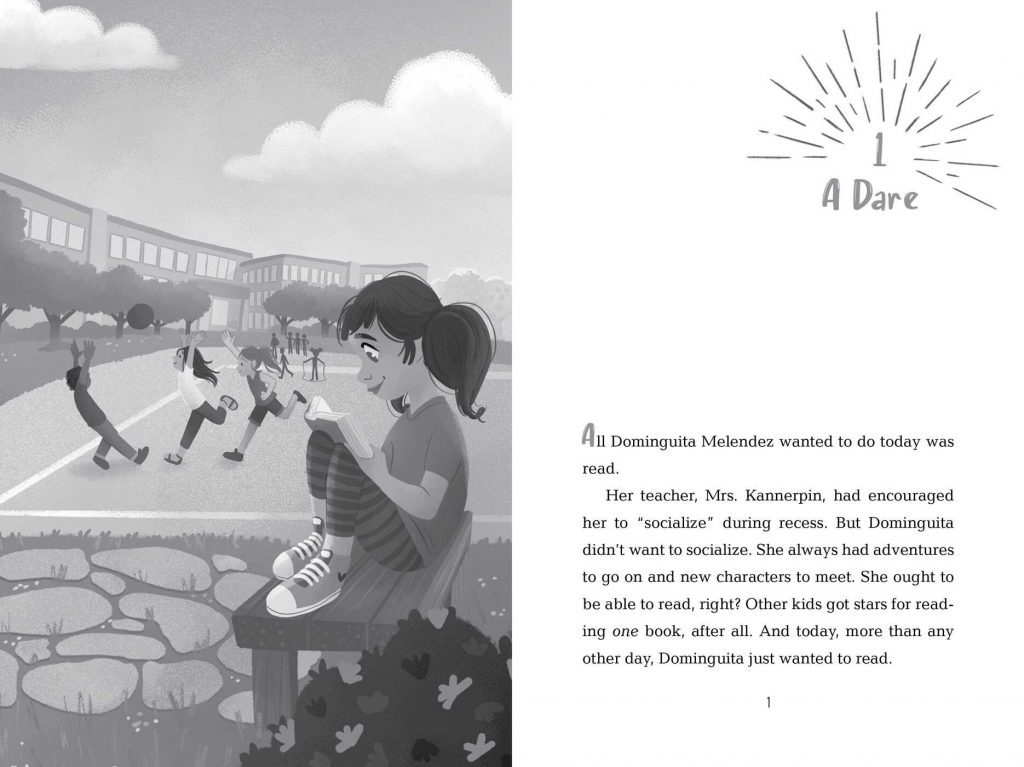 I love that Dominguita is inspired by the books on her grandmother’s shelf. What books inspired you as a kid?

I was in Cuba when I was a kid, so I was a lot like Dominguita’s grandmother. I read the classics. All of them. Particularly, Jules Verne. I loved adventure. My father gave me an allowance. He was a banker and he wanted me to learn to manage money. I don’t exactly remember how much it was, but I could spend it however I wanted to, so long as I accounted for it on this green ledger paper he gave me. I solved that problem very easily. Whatever he gave me was enough to buy a book. How lucky could I get?  One entry. I got what I wanted and my bookkeeping was minimized. Now that I think back on that, I wish I had talked to him about that. I did not learn what he wanted me to learn from that experience. But I bought and read all the classics, Robert Louis Stevenson, Jack London, Sir Walter Scott, Mark Twain and all the Louisa May Alcott book, and there were some Spanish books which today we would call graphic novels. I devoured those. They were cheaper. I could get a couple of those for the price of one of the other books. But whatever I read was always adventure.

I draw my own characters, so I’m always curious about that moment when your first see your characters drawn by someone else?

I always cry. Really. It’s just very emotional for me when someone takes my words and translates them to art. With Dominguita, I was very lucky. I had pictured her as a plucky kid. Someone who wasn’t afraid of anything. Someone who would stand up for what was right. And Fátima Anaya portrayed just that. I couldn’t have been happier. If you look at that first inside sketch when Dominguita is reading and recess is happening all around her, she is alone, but not lonely. She has her book, and she doesn’t need anything else. Fátima GOT Dominguita. She sees her the same way that I did. I actually think that Fátima understood Pancho Sanchez, Dom’s sidekick, even better than I did. I love the way she drew him. How he grew from book one to book two. And Steph is perfect. She is the peacemaker. And she looks it. Fátima is a superstar. So far in all my books I’ve been lucky in that the illustrators have made the book even better than what I envisioned. Their art has brought my text to a higher level.  I love Beep and Bob, by the way. I would have been happy with them.

Can you tell us about Dominguita’s next adventures?

In Captain Dom’s Treasure, Dominguita finds a treasure map in an old copy of Treasure Island. The kids are sure it’s a real map. But how to prove it? They use logic to solve their problem. Then, once they know there is an actual treasure, they need to follow the map to find it. But the map was dated 1967. It’s not easy. And what makes it worse is that a meanie, conveniently called Juan Largo (Long John), insinuates himself into the group trying to find the treasure. Dominguita and her crew have to outwit the intruder and get to the treasure first.

All for One has echoes of The Three Musketeers. The three friends have to save a quinceañera party (a fifteenth birthday party) from the dastardly Bublassi gang. It features chocolate covered toilet plungers as Dom’s musketeers weapon of choice. Of course, you can figure out what Sherlock Dom is all about. The crew tries to find the Lost Goat of Tapperville echoing The Hound of the Baskervilles—hound and all. There can be many more Dom stories based on even more classics. I hope I get to write them. 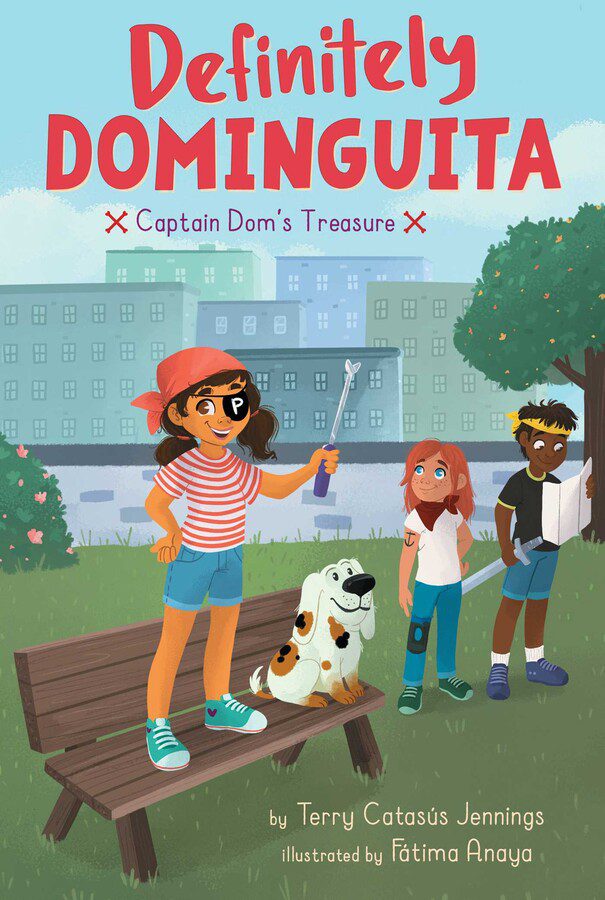 Any advice for young knights and storytellers?

Dominguita never gave up, and storytellers should never give up. It’s a long road, but I wouldn’t trade it. The good thing about Dominguita is that, in the end, she made friends. And she goes on to live her books with them. I hope that readers see in Dominguita a Cuban-American girl who’s just like them and that it opens the door, just a little bit more, to understanding.

Thank you so much, Terry! 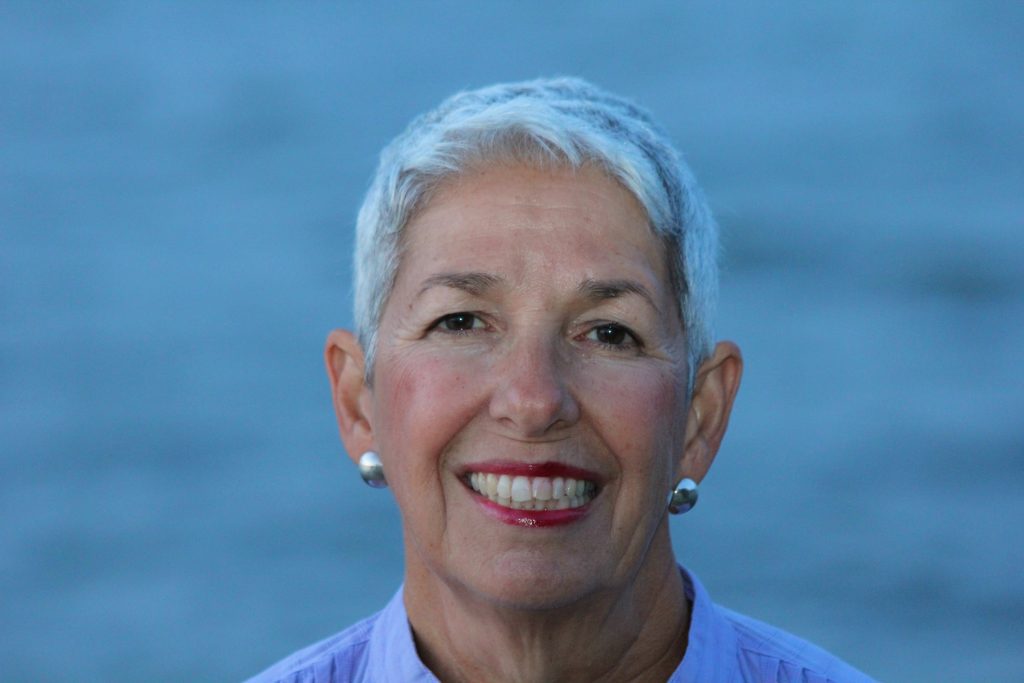